A few weeks back, I wrote about How to Write a Lot by Writing on Schedule and that post almost immediately became the most popular thing ever written for this website. Recently, Elisabeth de Mariaffi (author of the most recent addition to my to-read list, The Devil You Know) mentioned that post on her website. In her article, de Mariaffi notes a sign on her office door that simply says “NO” to ward off interruptions. Inside, also pinned to the door, is a second sign, one “that tells the writer YES.”

I don’t have an office door, so I don’t have a sign (my headphones are my “NO”). But I do something similar to de Mariaffi’s “YES” — I pray to the God of Writing.

The God of Writing

What does the God of Writing do? Like any good God, it answers prayers. I pray, then I flip the card over for the answer to my prayer. Here’s how it works.

Dear God of Writing, I despair, for the kitchen is a mess. This office is a mess. My whole life is a mess. I should clean up these messes, but I would like to work on a poem about The Texas Chain Saw Massacre. God of Writing, would you please grant me permission to ignore this mess and write a sonnet about Leatherface instead? 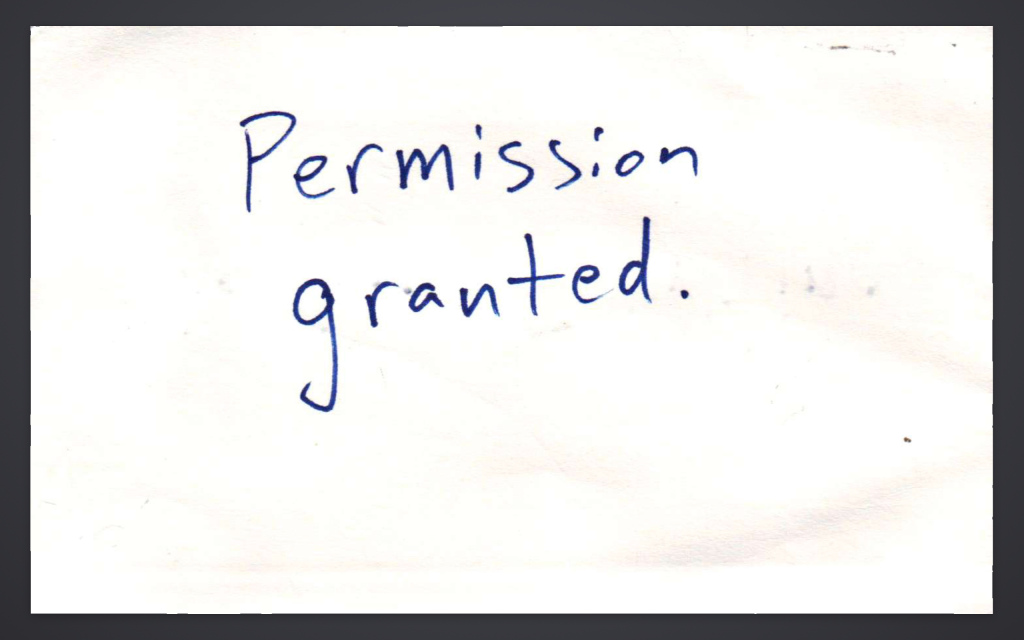 I created the God of Writing in response to my Catholic guilt. Although I identify as an atheist, it is more correct to say that I am a lapsed Catholic, since I was once confirmed in the Church and have not been excommunicated. More importantly, I suffer as much as any good Catholic from good ol’ Catholic guilt.

Those unfamiliar with Catholic guilt find the concept bizarre, so let me universalize it for you. The best parallel is the guilt that you feel when you are enjoying something. Not guilty because it is bad for you — not a guilty pleasure — but guilty whether or not it is good or bad for you. You feel guilty because of your enjoyment, and the thing you’re enjoying is irrelevant. So, when writing, I feel guilty for writing. I feel like there is something else I should be doing instead.

But there isn’t! Does this feeling go away just because you are a writer, and in fact your actual JOB is to write things? Nope. It gets worse, actually. In fact, if I don’t write then I feel guilty for not writing. Then when I start writing, I feel guilty for writing.

What’s the solution? My solution is the God of Writing. I literally go through an idiotic ritual requesting permission from God to write, even though I do not believe in God. The mockery of the ritual, which I built into the ritual itself, helps salvage my dignity.

I don’t pray to the God of Writing often, but I do when I need to. Just like I imagine de Mariaffi takes the signs seriously only on her bad days.

If you are a writer, and see writing as your career or your hoped-for career, the need to write should be obvious. Yet it is not always easy to write, because so often you will work on a project that has no definite deadline or even any definite future. You want to write a novel, but nobody has asked you to write a novel, nobody seems interested in your novel, there is no guarantee that anybody will want to publish your novel, or read your novel, and maybe when it’s done not even you will want to see the novel published or read. There is often no definite deadline associated with a large project like a novel, and definitely not any assurance of money or fame.

As difficult as it is in a circumstance like this, you need to give yourself permission to write. Nothing you do is as important as actually sitting down and writing, if you are a writer. (When it comes to working, at least. Probably a lot of other things in your life, non-work things, are far more important.)

This is an especially difficult thing to remember and keep focused on when you are successful as a writer. Success of any sort, major or minor, brings with it a lot of work. Work that isn’t writing. When you’re filling out forms and replying to emails, and drowning in writing-related work, it is difficult to remember that writing-related is NOT writing and therefore you need to force yourself to pull away from that thing that is almost due and focus on that thing that will NEVER be due.

The problem is compounded if you do not see writing as your career. I talk to a lot of people who write on the side, while focused on some other career, and I notice that they have the largest problem with this, because of course they see writing as a distraction from their career. They want to write, but they feel like they can’t spare the time, they can’t justify writing just because they enjoy it.

What I try to explain to them is that writing is the thing that will make their career. They want to be an accountant — well, every other accountant is an accountant. How can they set themselves apart? By being the accountant that writes. They can build an entire side business this way, or just build a reputation this way. Their writing has incredible potential to advance them in their non-writing career.

Even if their writing seems totally disconnected from their non-writing career, they would do well to connect the two. Maybe you’re an accountant that writes fantasy novels. Great! Start building a client list of fantasy novelists! Write a book called Write Off That Cool Sword: Accounting for Fantasy Novelists and hit the convention circuit. Write off your travel! You’ll be drowning in business.

I could (and might) write a whole book about money and writing, so I will just say a few quick things in summary. Money and writing connect over this issue of permission because so often we neglect writing because the time spent seems like a bad investment.

Writing is not a great way to make money — it’s a great way to create opportunities. (Sometimes these lead to money in roundabout ways, sometimes not.) Being able to write is like having a magical power that makes everything in your life easier and provides you a shortcut to accomplishing anything. But you need to learn how to wield the power, which isn’t easy. And the power demands a price: time and blood. And if you underestimate your power, it will leave you.

Previous: A few comments from Ryan Fitzpatrick on Why Poetry Sucks
Next: Chadwick Ginther on Goal-Setting for Writers (Interview)