It’s an interesting question, isn’t it, because there are so many answers for it, depending on the person asking. But rather worse is when no one asks. When family or non-artist friends ask, it can be awkward, especially when you’re writing poetry or obscure, mainly unpublishable fiction. One senses that they’re always a bit hopeful you’ve switched over to writing mysteries or thrillers. Something respectable. When you’ve been writing for 20ish years, the question just becomes increasingly awkward.

And then when the question is asked by a fellow writer, especially one to whom you’re quite close, there’s a shorthand that develops. You’ve been through several books together on each side, say. You’ve lived through each others’ acceptances, rejections. The many times you’ve been passed over, ignored, or sometimes, worse, noticed. Your friendship exists (for other reasons, too) because of this question. Because, amid the interruptions, you can keep bringing each other back to the question, back to the work, back to the dream of immersion in the work. The question, what are you working on right now? is meant to plunge you back into it, it is meant to be a dagger, it is meant to be the prompt, the snap of the fingers, to awaken you from a trance. The question is asked, not so much for an answer, but for company.

Because I don’t really like talking about what I’m working on with anyone other than a few close friends, I have a lot of fake answers at the ready. Or maybe not so much fake as they are superficial. I’m working on a prose work right now called “Transactions with Beauty” which is based partly on my blog Calm Things. I’m also working on getting a recent work of poetry published, and this one is titled, “Asking.” As well, my latest project is a website called Canadian Poetries which is slowly coming together. I work part time at the Edmonton Public Library, do odd bits of work for my partner, Robert Lemay, and am the mother of a teenager.

Thank you for asking. 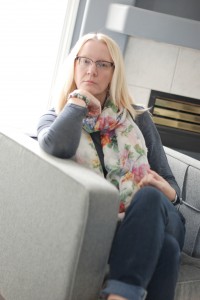 Shawna Lemay is the author of five books of poetry and one book of essays. Most recently, she has written an experimental novel titled, Hive: A Forgery, which is about the possibility of the existence of a woman art forger.

Previous: What are you working on right now, Victor Enns?
Next: Interview at Open Book Toronto about The Politics of Knives