Some things are incoming. I’m wrestling what topic I want to do an essay on for a VerseFest fundraiser of talks for the Factory Reading Series with Cameron Anstee and Stephen Brockwell Nov 15th. I’m trying to pin down details of readings to add to the southern Ontario jaunt. So far I’ll be a Messagio Galore groupie for the Windsor and St. Cats readings Oct 19 and 21 and I’ll read with Grey Borders Oct 24th and probably a reading in London Oct 23rd. I’ll probably be reading from the last of the second print run of the In Air/Air Out to raise money for the Guatemala Stove Project. Some things are getting settled. I’m getting the workshop facilitators set up for the Tree Seed Workshops for the spring 2013 session.

Some things I’m working on are long term, like the 40-word-year project that’s over 1100 entries in. I’m exploring what compressions and shapes of lines and reconciling the room in the head of autobiography. I’m closing in on 2000th posts of vegetarian and vegan meals. Daily I’m writing new poems whether I want to or not. They’re pushy buggers.

And I’m divvying up poems into 2 manuscript streams that hopefully will be out the door early next year and more the year after, depending on how the poems cooperate with each other. I’m also looking for any patterns that might cleave into chapbook lengths. At the same time I’m pricing paper stocks and test-burning patches on them to do covers for the new phafours press chapbook “Where there’s fire”. It’s a short anthology chapbook of one of the writing groups I’m in: the Rubies.We’ll do a group-binding session of the chapbooks sometime in October, which may be at least as much fun as that sounds. I’m hoping that will be out in November in time for the Ottawa Small Press Fair, November 17th. 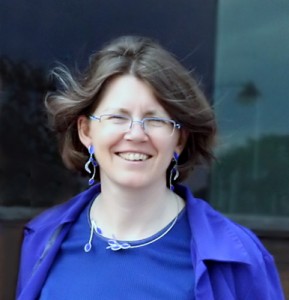 Pearl Pirie has been organizing the Tree Seed Workshop Series for the Tree Reading Series since 2009. She is always on the lookout for new facilitators to bend their poetic passion to mentor local writers there. She tweets, photographs and verbs about town. Her blogs include pesbo, Humanyms, and Eaten Up. Her poetry collections include Thirsts (Snare, 2011) Mammals of Hoarfrost (Corrupt Press, 2011), Between Stations (epiphany press, 2011), been shed bore (Chaudiere, 2010) and over my dead corpus (AngelHouse, 2010). She is working on a couple full-length manuscripts. Her author site is www.pearlpirie.com

Previous: Interview in Uptown
Next: What are you working on right now, Catherine Owen?