Sometimes I’m asked about my workflow for screenwriting — what software I use, and so forth. Although I have tried many combinations, at present I just use and recommend two programs: Scrivener (where I do ALL of my writing) and Highland.

(From time to time, I also use the Notes application on my iPad or iPhone, but then I dump that into Scrivener.)

The nutshell is that I plan and write everything in Scrivener and then output it to Highland to polish and format. The details are below, including a bit of my history with other software and other ways of working.

I first began screenwriting while studying under George Toles (the co-screenwriter of many Guy Maddin movies) at the University of Manitoba, in the early 2000s. I met David Navratil in that class, and somehow we ended up getting hired as screenwriting partners by Joseph Novak, to write some samurai movies.

We were “hired” for very little money, but nevertheless were hired, and wrote four feature-length films for Joe. All of the films were based on his story ideas, which we then developed and reworked.

The first of these scripts, Son of the Storm, captured the interest of a Hollywood producer and also the actor Cary Hiroyuki-Tagawa. However, the story was too similar to Tom Cruise’s movie The Last Samurai, and the main character (like Cruise’s, a white foreigner) wasn’t a role for Hiroyuki-Tagawa.

So, we wrote a second feature called Way of the Samurai. This script secured the “attachment” of Hiroyuki-Tagawa, but ultimately didn’t find funding. We wrote two more features, which had samurai elements but were more modern in their settings: Yakuza and Samurai on 47th. Then we more or less stopped writing samurai films.

Joe later ended up taking Way of the Samurai and reworking the script as a western, then shot the feature as a micro-budgeted independent film called Snake River. That’s how we ended up with a very strange credit, to the effect that the screenplay of Snake River was based on a screenplay that we wrote.

All of these movies were written in Final Draft. Thus began my love-hate affair with Final Draft. At the time, there were no real competitors for Final Draft. The very expensive Final Draft. (Although I have always paid either a student or an educator rate, rather than the full rate, it’s a pricey program even at these discounts.)

At the time, Final Draft was pricey but a godsend. I wrote many other things in Final Draft, including my M.A. thesis (a screenplay called The Sandman). However, as the years passed, and I purchased subsequent editions of Final Draft, I noticed that the program seemed to be getting worse and worse. I also noticed that it had garnered some serious competitors.

I have tried many other screenwriting programs over the years (I forget most of them) but the only viable competitor in my view was CeltX. Still, my affair with CeltX was fairly brief. At the time, it was a good program, but very much a poor man’s Final Draft.

Now, it has blossomed into a much more impressive flower. CeltX is an online software system and also offers a host of desktop software. Generally speaking, CeltX is also much less expensive than Final Draft, although it is now also a subscription service and so could easily cost much more, since it has been restructured as your monthly “screenwriting bill.”

While I don’t have extensive experience with CeltX, every now and again over the years I decide to try out its newer incarnation. I start using it, and then find myself drifting back to Final Draft.

I also tried out a host of other programs. For a long time, I was writing mostly in SuperNotecard and SuperNotecard for Scriptwriting.

For a while I was addicted to StorySkeleton, which I began using on the recommendation of David Annandale. This was in a period where I had a desktop PC and a PC laptop, but found myself doing most of my writing on my iPad.

What kept driving me from program to program (and also, in my non-screenwriting writing, driving me away from Word) was a simple goal: I wanted to get away from writing linearly. All of my books had been struggles to write, in part because of how non-linearly I work in my creative process, and I was finding screenplays harder to write as well. Then I discovered Scrivener.

I do all my screenwriting in Scrivener now, but I don’t use any of its screenwriting functions, or this template. You could, however.

Scrivener is in many ways the perfect program, but it has two weaknesses. One, it’s difficult to learn. There’s an incredible online course that simplifies the process of learning Scrivener and I highly recommend it. The course is well worth the cost for all the time and frustration it will save you, and all the power of Scrivener that it will help you unlock. When you know how to use Scrivener, you can use it for almost everything, including writing screenplays.

(Two, it’s not great for working with an editor, when you arrive at the point where you are trading files. For this, for various depressing reasons, we are still stuck with Microsoft Word.)

However, I don’t use any of Scrivener’s screenplay functions. Instead, I write in Scrivener using something called Fountain syntax (it’s simpler than it sounds) and then export the text to Highland, which formats it like a screenplay. I then export out of Highland to whatever file format I need.

This process is much simpler than it sounds. It’s the simplest process I’ve found, and the least expensive. Here’s a more detailed look at how I work on scripts.

Scrivener was initially developed to write novels and dissertations, and one of its great strengths is that it allows you to hold all of your research materials in the same program as your actual writing. As a result, it allows a seamless flow between writing and consulting your research.

Every time I have to consult research materials as I write, I kick myself because I wrote five books without Scrivener (well, more like ten books … I don’t publish everything I write) and at least as many screenplays.

My method of writing is very non-linear, and so without Scrivener I was working in a super-inefficient manner, wasting months and months of time fighting to get my software to do what I wanted. I want to stab my past self for not switching to Scrivener sooner.

In the past, I used actual index cards, or a separate program, to map out and develop the story. Scrivener has an outstanding index card view that I will write about another day, which is especially useful in the planning and editing processes.

The great power of Scrivener, as I’ve mentioned, is how it encourages non-linear writing. You can jump between making notes, shuffling index cards, and writing actual scenes of the script easily. I will map the story structure using these cards, which (in other views) also contain all my notes for each scene and my drafts of the actual script as well.

This sounds much more complicated than it is. Fountain syntax is basically a way of writing that a software program (like Highland) can read. You can find a lot of information about Fountain here.

All you really need to understand is this basic concept: when you write a certain way, a program like Highland can “read” it. Let’s imagine that I wrote this (the screenshot is from Highland, but I could write this in any program — usually I’ll use Scrivener): 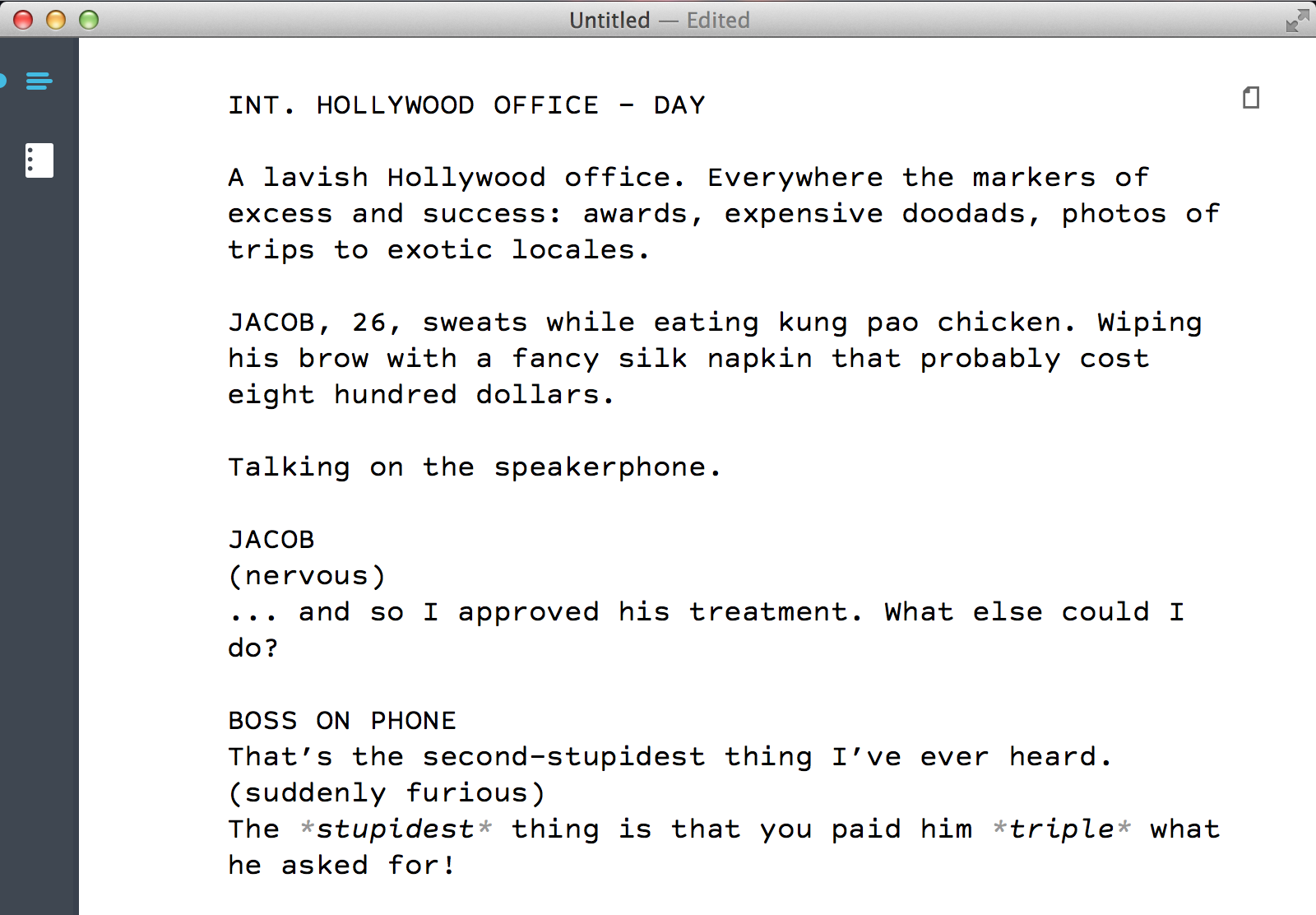 We move on to our next step:

Then Highland automatically reformats the text in proper screenplay format, like this:

That’s right. It takes this program a single click to reformat the above (Fountain syntax) text as a screenplay.

I do all my editing before this point. Basically, I only use a screenwriting program (Highland) when I’m ready to do a final pass/polish. If necessary, I make a slight modification or two in Highland (you just switch between the two views, of your text and your formatted text).

You could, of course, just write in Highland. If you like to write more linearly, Highland is perfect for you — you can write in the editor view where you don’t have to worry at all about your format, and then just click to the formatted view anytime you want to see how things look. You don’t have to worry about anything other than writing. The program automatically does all the formatting for you.

When I work with shorter scripts, or test scenes, I often just write directly in Highland. Due to its minimalist design and clean, intuitive interface, it’s the least complex and as a result the best and most enjoyable screenwriting program (yes, the emphasis in Highland is on writing — not on formatting or other non-essential tinkering).

I have to offer one caveat about Highland, however: it does not, currently, work well for writing multicam TV. This is because there are too many TV formats for (mostly) comedies, and although there is something approximating a “multicam format” there really is nothing in TV writing that is “standard” format.

Many TV dramas and single-cam shows just use a mild variation of standard screenplay format, so Highland works great for almost everything. But if you want to write a spec script for The Big Bang Theory then Highland isn’t for you, although the software’s developer (screenwriter John August — best known for writing various Tim Burton films) told me that they “will try to do multicam” in the future, so I expect this to become a nonissue.

(Since I’m working on a feature film project for the next while, and made the PC to Mac switch recently, I am currently without Final Draft. My hope is that this issue is resolved before it matters to me, so I can stick entirely with Scrivener+Highland for screenwriting rather than buying a Mac version of Final Draft or having to find another third program.)

Incidentally, this is why Highland is a great program, outside of how inexpensive it is compared to other programs. It was literally designed by a screenwriter for screenwriters. It’s easy to use. It’s streamlined and pretty. But most importantly, it contains nothing that you don’t absolutely need.

Highland easily exports out as various file types, so a few clicks are really all you need to pull your text from any program whatsoever (I use Scrivener, but you could use Word or even plain text on your phone) and reflow it all in standard screenplay format.

Here are the main benefits of this workflow:

That’s my screenwriting workflow — let me know in the comments below if you recommend other programs, or other ways of working, or if you have any questions or advice.

Previous: Introduction to Why Poetry Sucks: An Anthology of Humorous Experimental Canadian Poetry
Next: You Should Quit (including a translation of “Catullus 85”)