GMB Chomichuk is an award-winning writer, illustrator and public speaker. His work has appeared in film, television, books, comics and graphic novels. Sometimes he writes and/or illustrates occult suspense stories like The Imagination Manifesto, Midnight City and Underworld, science fiction works like Raygun Gothic and Infinitum, or inspirational all-ages adventure stories like Cassie and Tonk. He wants you to join the fight and make comics. Watch his creative process in the Kelly-Anne Riess documentary Artists By Night. (Photo credit: Michael Sanders)

I go way back with GMB Chomichuk, to an amazing creative writing class with Dennis Cooley that included Journey Prize-winning author Saleema Nawaz and many other luminaries, half of whom have gone on to publish multiple books. Greg is also my daughter’s favourite of my artist friends, so that’s the feather in his cap.

1. What do you want to talk about, but nobody ever asks?

As I do this for a living, more and more I realize that the distinction of what is popular and good isn’t up to the writer. If you want to endlessly craft and rewrite a single manuscript you might be a great writer but you aren’t likely to be able be a professional writer. To write as a job requires you to work everyday if the muse shows up or not. There isn’t much room for self doubt or worry, those are the enemy of momentum. These days I try to save my criticism for the finished piece, then be ruthless.

2. What advice do you wish you’d received, but didn’t, when you first started to take writing seriously?

That lots of short stories are failed novels. Use everything.

3. What are your regular habits as a writer?

Carry a notebook. Write down ideas, when book is full move forward the ideas you like into the new book. Repeat each month. When I need an idea but don’t have one, I check the books. Ideas that I cary forward tend to become stories. Sum up the whole thing on a single page before I start. Infinitum, Midnight City, Snow Troll’s Daughter and the forthcoming The Good Boys and Minus Institute all started that way. Send submissions. Often.

4. What is your editing process?

I write it the way I want, sit on it for a bit while I work of something else, return to it and realized I have to redo everything. Redo everything. Pass it to my editor, who suggests that I change everything back to the way it was.

5. What is your greatest difficulty as a writer?

Recognizing when a new idea I have for a current project would be better as its own thing.

6. How do you decide which book to read next?

I look for things that feel like the opposite to what I’m working on.

7. What is your greatest single ambition?

To convince others that they can and should use their time to create things. Even if people have no intention of publishing or exhibiting their work, the act of making something will reveal a lot about themselves they might not have had a means to reveal before.

Making up stories and writing them down has been the single constant in my life since I could read and write. I don’t know how to quit because I can’t remember starting. 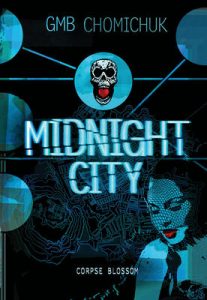